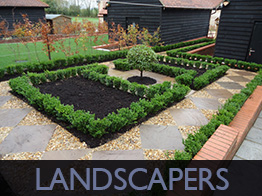 There is one topic that dominates social media sites dedicated to landscaping, and paving in particular, that causes so many misunderstandings and conflict in the event of a dispute leading to a complaint and legal action by the customer. This matter concerns ownership of materials either left over from a project, or left unused in the event of a project abandoned during construction. There is a third element to the matter of ownership of materials, involving the wording in many contracts once the materials have been incorporated into a landscape scheme.

Dealing with the first of these scenarios – materials left over after a project has been completed. Taking natural sandstone paving as an example, a project that had been estimated as requiring (say) 100 square metres of paving slabs, delivered to site in wooden crates each containing (say) 12 square metres – which is nine crates or 108m2 allowing 8% wastage. Due to the usual quality of natural stone the contractor will have probably ordered ten crates or 120 m2, knowing that there will be wastage due to cutting and chipping.

The contractor will have allowed 120m2 of paving in their estimating, even if they quote for only 100m2. Most contractors will be working under a contract, with terms and conditions, one of which will be a clause to the effect that ‘all materials remain the property of the contractor until paid for in full’ or words to that effect.

At the end of the project, some customers will complain that a) they own the materials because they have paid for them, or b) they own the materials because they must have been overcharged in the first place, demanding that they be left on site. This is a common problem, which should never arise if the contractor has explained the working methodology and practical requirements of the construction techniques requiring extra material for the purposes of completing the project without having to buy additional material.

The question of ownership of excess materials should never arise, and yet it frequently causes friction and legal claims on the ownership of the goods. Ownership of goods also arises in the event of an abandoned project – for whatever reason – where (say) half of the paving works have been completed, with the second half still crated awaiting use. These incomplete projects may be evaluated under a legal assessment known as Quantum mauriat which means ‘as much as he has earned’ ‘as much as one deserves’ whereby an independent landscape consultant is engaged to carry out a survey and report on the project.

Therefore, if the crated materials are removed from the assessment and valuation by removal off site, the value of the works completed will be adjusted to take that reduction into account. It is more likely that the customer would wish to retain the materials, if they intend to have the job completed by another contractor, and use the paving and not have them removed. If a project has been condemned in the first instance, it may well be the case that the customer would wish all paving – laid and crated – to be removed off site.

The third scenario is that most commonly misconstrued by some contractors – that of literally interpreting the phrase ‘all materials remain the property of the contractor until paid for in full’ thinking they have the right to enter the property, take up and remove fixed materials on the basis that they have not been paid for.  I have seen several videos showing contractors breaking their way into gardens and either lifting and removing paving, decking, brickwork etc or smashing the features with sledge hammers, in the belief that the clause regarding ownership means they have the right to do so.

Quite apart from the various criminal acts that are violated during these actions, including trespass, criminal damage, Breach of The Peace and breaking and entering with intent to cause criminal damage, the contractor is losing any chance of redress through the Courts, placing themselves outside of the Law.

Materials should be treated with respect at all times. In the event of crated i.e. new and unused materials, they will become ‘currency’ in any settlement that is reached between the two parties.

There are other elements to consider when thinking about materials that have been left on unfinished projects, regardless of ownership. Storage and site location may become major factors in any hiatus caused by the interruption of a scheme. Piles of sand may be placed in such positions as to cause problems with leaching into or blocking drainage systems. Packs of bricks may have sharp metal edges from the banding strips, or at risk of collapse from an opened pack.

Plants and living materials may be stored temporarily on site, and will require constant attention and watering, standing up during windy weather or secure from theft or damage by pets, children and vermin. Timber requiring shading and protection and a host of other materials may be involved in the equation. Responsibility for the welfare of materials and the safety for site users may become very important – and expensive – elements of any dispute.

This responsibility may fall on the shoulders of the customer. If they are deemed to be responsible under the Construction (Design Management) Regulations 2015 if they have not appointed a Principal Designer or Principal Contractor in writing at the beginning of a project, they remain responsible for the scheme.

Trying to resolve responsibility and ownership of materials left over or currently unused on a landscape project is rarely straightforward, and any arbiter – a professional landscape consultant commissioned to unravel an abandoned scheme – will look to both parties in an attempt to resolve matters as a part of producing a Court’s compliant report, which necessarily follows protocol and prescribed format.

To summarise; do not rely on terms and conditions to protect you when it comes to ownership of material, used or unused. They will probably prove meaningless, and certainly do not give you the right to return to site and remove anything without written permission.